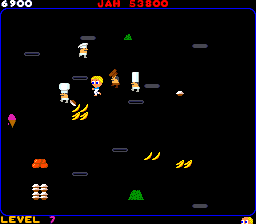 Food Fight (also styled as Charley Chuck's Food Fight) is an arcade game released by Atari in 1983. The player guides young Charley Chuck, who is trying to eat an ice cream cone before it melts, while avoiding four chefs bent on stopping him. In Food Fight, the player controls a young boy named Charley Chuck. The object of the game is to eat an ice cream cone located on the opposite side of an open playfield. The ice cream is slowly melting, and must be consumed before it melts completely. Standing between Charley and the ice cream are four chefs named Oscar, Angelo, Jacques, and Zorba. The chefs appear from holes in the floor of the level and will chase after Charley. The chefs are identified by the shape of their toques: Oscar's is big and round; Angelo's is short and rectangular; Jacques' is curved; and Zorba's is tall and slender. Scattered throughout the level are piles of food, such as pies, peas, tomatoes, and bananas. Both the player and the chefs can grab food from the piles to throw at each other. The supplies of most foods are limited, but watermelon, which appears either on special levels exclusively or with other foods in later levels, is unlimited in supply. If the chefs are hit by food thrown either by the player or by other chefs, they are stunned for a few seconds. If the player is hit, a life is lost. The player also loses a life if a chef touches Charley, if Charley falls through an open hole, or if the ice cream melts before it is eaten. Points are scored for each chef hit by food thrown by the player (up to 1000 points each), luring a chef over an open hole and for each remaining pile of food on the level. The ice cream is worth 500 points multiplied by the level number, up to a maximum of 25,000 points from level 50 onwards to the last regular level, level 125. On occasion, if the player reaches the ice cream cone just before it melts, the game will present the player with an instant replay of that level. Food Fight was developed by General Computer Corporation (GCC), the same company that produced Midway's Ms. Pac-Man. Like Ms. Pac-Man, GCC's connection to Atari was born out of accusations of copyright infringement. The company had produced a kit that would speed up Atari's Missile Command arcade machines, but with General Computer claiming the copyright for the modified game. Fearing for its intellectual property rights, Atari sued GCC for USD$15 million. The case was settled out of court, with Atari contracting GCC to produce video games for them, including Food Fight and Quantum. In an interview Jonathan Hurd said everyone at GCC contributed to the development. The initials of the people who were most heavily involved in creating Food Fight are in the high score table.

You play as Charley trying to eat an ice cream cone. But first you must avoid the chefs that are out to get you: Angelo, Zorba, Oscar, and Jacques. Avoid the food thrown at you by the chefs to get the cone. You can also throw your own food at the chefs to slow them down.

The first time you run the game, it will say NVRAM FAILED:.... Press P1 - Button 1 to proceed. The NVRAM will be automatically initialized. Exit with F2.